Klik for at se vores kommende events og foredrag her

Mysticism is about the hidden and inexplicable. Initially, mysticism was used to study the divine in general.

But today the word is used in many other cases, and it has largely lost its meaning. We often say, "something is mysterious," if things don't go our way.

Any religion or belief has its form of mysticism. Mysticism originally means "studying religious or other ecstatic state".

Eg. is the sight of a ghost "paranormal and mysterious". One attributes the ghost to angels / godly attributes, and that it comes from a possible physical explanatory realm. So the word is really just a definition. Paranormal is not the same as mysterious. The paranormal does not deal with the divine. 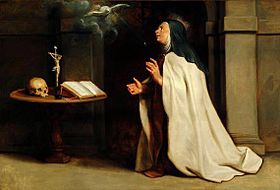 The Appearance of the Holy Spirit before Saint Teresa of Ávila - Quite mystic.